Before hearing Archbishop Desmond Tutu speak at the “Be The Spark” conference in Tacoma, Washington, WMD was privileged with the opportunity to meet the Archbishop for an hour-long conversation.

The meeting gave WMD an opportunity to share our vision with the Archbishop and ask for his support. He agreed to make a short video on the healing and transformative power of saying “I’m sorry” and consented to have a few pictures taken of him with us. When asked what we could do for him, he laughed and said, “You can help me find 30 million dollars to build a peace center in South Africa.” 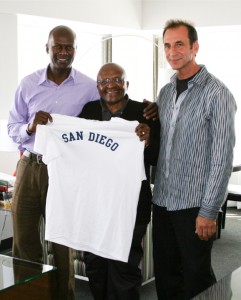 WMD presents the Archbishop with a small token of appreciation

Being in the presence of Desmond Tutu was like standing in a light breeze. When asked what he thought of our project he said, “I think you are crazy, and courageous. What you are trying to do is bring people to their higher self. We are giants, yet we want to be dwarfs.” 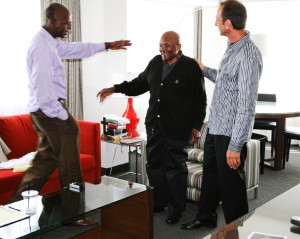 In November of 2008, immediately after the election of President Obama, Amy Goodman interviewed Archbishop Desmond Tutu and asked if he had any advice for the new president. The Archbishop suggested it “would be wonderful if, on behalf of the American people, the President could apologize to the Iraqi people.” The entire clip of the program begins with an excerpt of Tutu giving his advice to President Obama.

It was this interview that inspired Steve Garber, President and founder of the WMD Foundation, to begin his quest, via social media and video, to start the “I’m sorry” project on a grass roots level.

The WMD has extended this project to include American soldiers, coalition soldiers, their families and all who have suffered pain and/or loss as a result of the war in Iraq.

This entry was posted in News. Bookmark the permalink.